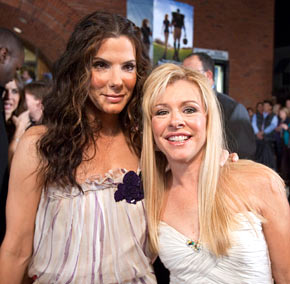 Sandra Bullock’s “The Blind Side” was unveiled two years ago now — but the impact of the beloved film that won Bullock her Best Actress Academy Award lingers on.

For one thing, the friendship between Bullock her real-life counterpart is thriving. Leigh Ann Tuohy tells us she’s hoping to get together with the actress again over the holidays. “We have a couple of potential dates, maybe a Ravens game. She is a Michael Oher fan,” notes Tuohy, referring to the Baltimore Ravens offensive tackle who is her adopted son — whose story was depicted in the film. “We watch the football games and talk on the phone about what did or didn’t happen. She is a member of this family, a great lady.”

Tuohy and her husband, Sean, are also friends with “Blind Side” leading man Tim McGraw and wife Faith Hill. “It’s easier to see them, because they live just down the road in Nashville. We sat with Tim and Faith at a Titans game a couple of weeks ago,” she reports.

The Tuohys have also worked to parlay public attention from the movie into help for more of “the Michael Ohers out there” — with their Making it Happen Foundation for underprivileged kids, and with scores of public speaking engagements she makes before corporate, school and community groups.

“I really feel like the person who has the cure for cancer or Parkinsons probably lives in an inner city somewhere, and just needs a chance, an opportunity,” says Leigh Ann. She would love to help the 400,000 children in foster care in this country “find forever families.” However, she adds, “You don’t have to adopt to make a difference. It’s not hard to unearth people who need help. Last week, I met a seven-year-old boy who’d never seen a cupcake before in his life. I’ve shown lots of kids the ocean for the first time and it always takes my breath away.”

Leigh Anne, formerly a member of the “Extreme Makeover: Home Edition” design team, has several prospects on the table that would put her in a position of greater prominence in 2012. Among them: a stint on “Dancing With the Stars.” There’s also a possible Leigh Ann Tuohy talk show. “The more we’re in the public eye, the more good we can do,” declares the Tennessee live wire. “If I have to go out and do a little song and dance and make a fool of myself, I will.”