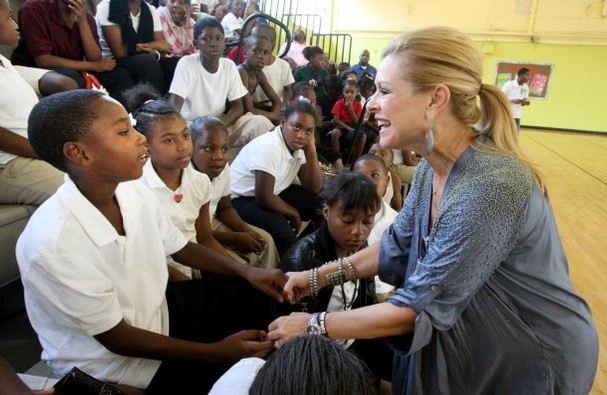 Anthony Moore, 14, an eighth-grader at Vance Middle School, speaks with Leigh Anne Tuohy at the Porter Branch of the Boys & Girls Clubs on South Lauderdale when Tuohy and husband Sean Tuohy stopped the club among three they visited Wednesday to present 12 computers, a new plasma TV, two new printers, office and school supplies to help create teen centers that will draw kids into the clubs. The donation is part of an $11,000 grant from the Taco Bell Foundation for Teens to help youths overcome obstacles to graduation.

Sean and Leigh Anne Tuohy and their children arrived with cupcakes, computers and words of encouragement for three Boys & Girls Clubs Wednesday.

“Our hope is to impress on these kids that they should take every educational opportunity made available to them and aspire to be all that they can be,” said Leigh Anne Tuohy.

The Tuohy family’s Making It Happen Foundation and employees of about 70 Taco Bells in the family’s franchise operation contributed $11,000 used to buy a dozen computers, school supplies and dozens of cupcakes to be divided among three area Boys & Girls Clubs. The Tuohys began at the Porter Goodwill club on Lauderdale, where they dropped off six new Dell desktop computers. They planned to later donate three computers each at the Buckman branch and Sycamore View branch clubs.

The Porter Goodwill club’s executive director, Antonio Harrison, said earlier donations from throughout the community had helped the club set up a computer lab with 15 desktop computers, some in poor condition. With Wednesday’s donations, the club now has 21 computers, but it has about 200 club members.

Harris said the Tuohy family and Taco Bell’s generosity “gave me hope that there are people who are paying attention and want to help somebody. This gives six more kids a chance to do their school work.”

Boys and Girls Clubs spokeswoman Megan Klein said children who have joined the clubs have high graduation rates. She said the clubs’ members had a 100 percent graduation rate last year and 99.6 percent the year before.

Sean Tuohy said he brought his children, son Sean Jr. and daughter Collins, because they have learned the value of lending a helping hand. “My kids believe that if you stop and invest in someone’s life you can make a difference.” He said he also wanted students to see that “you don’t have to be 50 years old to make a difference.”