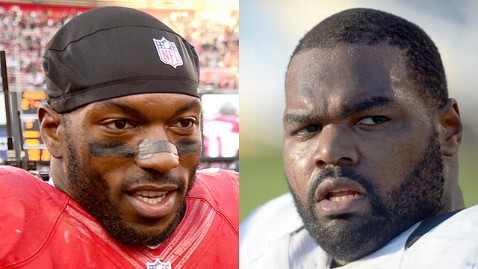 On Super Bowl Sunday, there will be two brothers coaching on opposite sides of the field and two players on the competing teams who describe themselves as brothers in life — not by birth, but by life’s circumstances.

Michael Oher, whose story was made famous in the Oscar-winning film “The Blind Side,” grew up in Memphis, Tenn., the son of a crack-addict mother and an absent father. He didn’t have a permanent home but was eventually taken in by Leigh Anne Tuohy and her family.

“Leigh Anne, she taught me, she was the first one who ever told me she loved me,” said Oher, now an offensive tackle for the Baltimore Ravens. “I mean, I had never heard that before.”

Patrick Willis, a linebacker for the San Francisco 49ers, was Oher’s teammate at the University of Mississippi and traveled a similar road.

He escaped an abusive father in rural Tennessee who beat him with pots and pans. Willis and his siblings moved in with Chris Finley, a high school basketball coach, and his wife Julie.

“I said, ‘Yeah, we can help them,’” said Julie Finley, Willis’ foster mother. “Of course everybody at the time was [saying,] ‘You don’t have a clue what you’re doing.’”

At an NFL media event in New Orleans today, Willis and Oher said they were lifelong friends who spoke all the time.

“We’re great friends,” Oher said. “I knew his story when we went to school. We hung out all the time. … He just loved the game of football [and I] just wanted to be with somebody like that. … I just bought a car from him not too long ago but once we get on the field, all it is, I’m trying to do my job and get physical.”

The two men told ABC News today that they truly loved their adoptive parents and that the families would be watching with joy from the sidelines this weekend.

“They’ve been there. They’ve been through the thick and thin,’” Willis said of the Finleys. “The good and the bad. The crazy years. Just to have them down here this weekend to enjoy this experience with me is truly a blessing.”