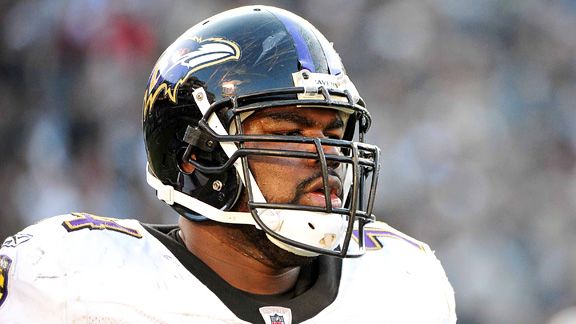 Kyle Terada/US Presswire
Ravens offensive tackle Michael Oher is tired of the 2009 blockbuster based loosely on his life. He’s watched “The Blind Side” just once.

NEW ORLEANS — Michael Oher doesn’t want to talk about “The Blind Side.”

As in really, really doesn’t want to talk about it. The hulking Baltimore Ravens offensive tackle stood on the turf during Super Bowl XLVII media day, politely shutting down the steady stream of questions about the blockbuster film that is loosely based on his life.

Oher has been answering questions about “The Blind Side” for more than three years now, since the movie was released in November 2009, during his rookie season in the NFL. But he has watched it only once.

“The movie, it wasn’t me,” he said, in the same way he has tried to explain over and over again that he doesn’t appreciate how the film dumbed him down and made it seem like he knew nothing about football before meeting the well-to-do Tuohy family, who took him in at age 17 after he bounced around the foster care system. (Oher was one of 12 children born to an addict mother and a father who was often in prison.)

“This may come as a shock, but they tend to embellish things in Hollywood,” Ravens center Matt Birk said recently. “Real-life Mike Oher is better.”

As a matter of fact, Oher’s eyes lit up at one point during media day when he was asked if the Tuohys will be at Sunday’s big game. “Yeah,” he said, with a look that implied that it was a silly question. “I’ve got them coming to the game. They’re still my family.”

The Tuohys are staying at the Ravens’ team hotel, the Hilton Riverside. And when it comes to talking about the film — the good, the bad, all of it — Leigh Anne Tuohy is the complete opposite of Oher, her adopted son. She prefers to focus on the platform that the movie, which grossed more than $300 million, has given her family.

Tuohy even gets a little animated when discussing Oher’s negative reaction to the film. “Michael gets exasperated because he thinks the movie makes him look bad,” she said during an interview with espnW, in a voice sounding full of love. “I say, ‘You know what? Get over yourself! It’s not always about you.’ Really, S.J. is the one who comes out on the short end of the stick, not Michael.”

S.J. is Sean Jr., the biological son of Leigh Anne and her husband, Sean Tuohy; the couple, who own dozens of fast-food franchises, also have a daughter, Collins. Little Sean was 7 when Michael came to live with the family in Memphis, Tenn. As the story goes, the Tuohys were driving away from school one evening when Leigh Anne turned around and saw Michael walking, alone, in the cold. After learning that Michael intended to spend the night in the school gym, the family offered him a room in their home.

Sean Jr. is in college now, but “The Blind Side” came out while he was still in high school, which meant he became the recipient of endless taunts, especially when his basketball team played away games. “Every time he touched the ball, it would be something,” Leigh Anne said. “If he took a charge, they would chant, ‘Sandra Bullock! Sandra Bullock!'” (In the movie, Leigh Anne is portrayed by Bullock, whose performance earned her the Academy Award for Best Actress. The two women remain good friends, and Bullock is expected to attend Sunday’s game.)

Sitting in the lobby of the Hilton on Thursday afternoon, Leigh Anne and Collins were decked out head to toe in Ravens gear. Collins, who’s 25, was sporting boots embroidered with a 74, Michael’s jersey number. A black rubber band, with the words “TURN AROUND” on it, dangled from Leigh Anne’s wrist, and she happily explained that it encapsulates the family’s message about advocating for foster care and adoption.

For the Tuohys, the words are quite literal: They turned around and saw Oher. But the phrase has a more figurative meaning for the rest of the world. “That part of the movie never gets old is that it allows us to go around and talk about kids who need an opportunity,” Leigh Anne said. “And, God knows, in this country right now there is a tremendous amount of them. The message is, turn around. You don’t have to adopt a kid, but we can all do something.

“Foster care is my biggest beef,” she continued. “In this country, we have kids we take care of and keep taking care of, but then … they’re 17 years old on Monday, and on Tuesday they’re 18 and we throw them to the curb, in every state in the country. OK, so, they couldn’t take care of themselves yesterday, but in 24 hours they’re going to twitch their nose and have a job and be ready to take care of themselves?”

While Leigh Anne and Sean are working to help change certain legislation surrounding the country’s foster care system, that’s not specifically what this trip to New Orleans is about. It’s about the Super Bowl, about “the cherry on top of the sundae,” as Leigh Anne puts it, referring to Oher’s football journey. She remembers watching him and Patrick Willis, teammates at the University of Mississippi, sitting in her living room and practicing their signatures years ago. On Sunday, the two will square off as opponents, with Oher trying to protect Ravens quarterback Joe Flacco from Willis, the inside linebacker and leader of the 49ers’ fierce defense.

At least one member of the Tuohy family has traveled to nearly every game Oher has played for the Ravens. Sunday will be a little different, of course, as an entire entourage plans to watch him do his thing — something he has been good at for a long time, even well before meeting the Tuohys.

“Everyone had different reactions to the film,” Leigh Anne said. “But the thing I try to remember is that it gave us a voice. It gave us a way to address the issues we’re passionate about. I mean, look at what can happen if a kid is given a chance?”