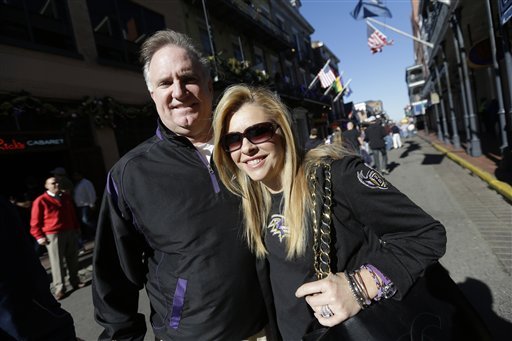 NEW ORLEANS (AP) — A knowing grin spread across Sean Tuohy’s face as he considered the uncanny connections between the hit film that changed his family’s life and the fact that Baltimore Ravens offensive lineman Michael Oher will play in his first Super Bowl in the Big Easy.

New Orleans is where Tuohy grew up and went to high school with author Michael Lewis, who wrote ”The Blind Side.”

The book led to the movie, which depicted the Tuohys’ rewarding experience as Oher’s adoptive family. Actress Sandra Bullock, who starred as Sean Tuohy’s wife, Leigh Anne, owns a home in New Orleans.

”And there are people that think that’s a coincidence,” Sean Tuohy said. ”How stupid is that?

”We’ve got a huge sign in our garage that says: ‘We believe in miracles,”’ he continued. ”For other people, it may be hard to understand that. For us, it’s easy.”

It certainly seems like fate has given the Tuohys not just another measure of validation for the decision they made to nurture a child from a broken home, but also a platform to talk about their mission to help more kids.

”To me, when I look at Michael, the only down side of it is, you sit there and go, ‘If someone as immensely talented as Michael Oher, that society pretty much didn’t value, almost falls through the cracks, can you imagine who gets left behind,” Leigh Anne Tuohy said. ”So you sit there and go, ‘How many kids are out there that if given a chance can be a Michael Oher.”’

The Tuohys took Oher into their Memphis, Tenn., home when he was a teenager. Suddenly, Oher was living a life of privilege.

Sean Tuohy, a former college basketball star at Mississippi, owns dozens of fast-food restaurants and also is part of the TV broadcast team for the NBA’s Memphis Grizzlies. Leigh Anne Tuohy has her own interior design firm.

The Tuohys helped Oher through high school, where his prowess on the offensive line landed him several scholarship offers at major programs. He chose Ole Miss, where he was an all-Southeastern Conference lineman before the Ravens made him a first-round draft choice in 2009.

Inspired by the public’s response to ”The Blind Side,” the Tuohys created the Making it Happen Foundation, which offers financial help to those committed to improving the lives of children living in poverty and unstable homes.

The Tuohys described their foundation grants as modest. In some cases, it might not be more than paying for a flight to help someone make a cross-country trip to adopt a child.

”We all can invest time, and that’s made Michael, us investing time in this young man and loving him,” Leigh Anne Tuohy said. ”That’s given him the character, not the check. You need it to go hand-in-hand if it can, but we’re all capable of investing time.”

Oher is pleased his adoptive parents are getting another platform to disseminate an important message, even if he is a little weary of talking about his life in the context of a movie.

The Tuohys arrived in New Orleans on Thursday afternoon and have a packed schedule through the weekend, including dinner with Bullock, who’ll also attend the Super Bowl with the family on Sunday evening.

Bullock has remained friends with the family since filming the movie, and sometimes her charity work in New Orleans coincides with that of the Tuohys.

”She’s a great advocate of doing the right thing. She’s a big giver,” Leigh Anne Tuohy said. ”She follows Michael’s career every step of the way. It’s funny. I’ll get texts during the game: ‘Why did they do this? They shouldn’t have done that.”’

Leigh Anne Tuohy, a petite blonde who talks a mile a minute in a thick Southern accent, is very similar to the way she was portrayed by Bullock – so much so that Sean Tuohy describes it as ”scary.”

”She hit it right down to the look, the action, the whole thing,” he said.

While dining with a large group of friends and family at a downtown New Orleans restaurant, Leigh Anne Tuohy wore a V-neck T-shirt with a sequined Ravens logo on it. With this being Super Bowl weekend, she said she was ”going to be all sparkle and dazzle and rock-n-roll.”

”This is way more fun, more exciting, more hyped up than Oscar week,” she said. ”Way more. It can’t even compare.”

The Tuohys have been to Super Bowls before, but only as casual fans. Because Oher and their son S.J. (which stands for Sean Jr.) are such big sports fans, the family often planned vacations around major sporting events.

This, of course, is different, and not only because Oher is in the game. One of Oher’s best friends is 49ers linebacker Patrick Willis, a former teammate at Ole Miss.

”I can remember when Patrick Willis and Michael would sit in our living room and practice writing their autographs,” Leigh Anne Tuohy said. ”Well now they’re really doing that and we’re just really proud.

Like Oher, Willis also was raised by foster parents.

”These are great guys,” Leigh Anne Tuohy said. ”So their stories give us a platform to go around and say, there’s a lot of great kids out there that need a chance.” 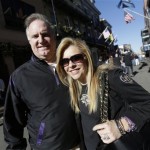 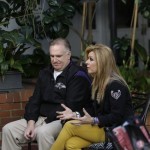 In this Friday, Feb. 1, 2013 photo, Sean and Leigh Anne Tuohy, adoptive parents of Baltimore Ravens starting offensive lineman Michael Oher, take part in a television interview in New Orleans. They were depicted in the move “The Blind Side” and will be attending Sunday’s NFL football Super Bowl between the Ravens and the San Francisco 49ers. (AP Photo/Gerald Herbert) 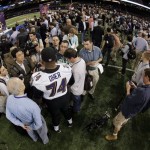