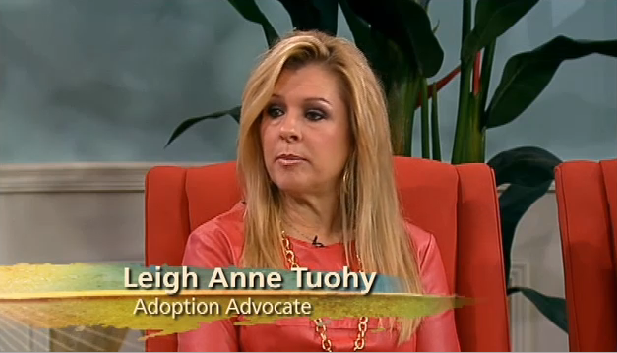 Leigh Anne Tuohy stops by the Daytime studio to talk about changing the lives of children through adoption. She’s best known for being featured in Michael Lewis’ 2006 book, The Blind Side: Evolution of a Game, and its 2009 feature film adaptation The Blind Side. In the film, Tuohy was portrayed by actress Sandra Bullock, who won the Oscar for the performance.
Tuohy married her husband Sean Tuohy in the mid-1980s. They have three children: son Michael Oher, (whom they adopted),  a former Ole Miss Rebels football player and Baltimore Ravens first-round draft selection and starting offensive tackle, daughter Collins Tuohy, who was a state champion at the pole vault, and son Sean Tuohy, Jr. who currently plays guard for the Loyola University Maryland Greyhounds. Tuohy and her husband live in Memphis, Tennessee.