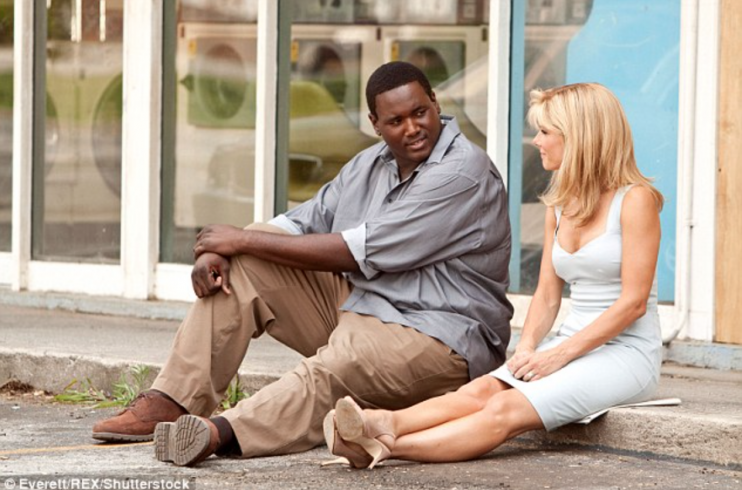 The mother whose story of adopting a homeless African American teen inspired the Oscar-winning film The Blind Side has spoken of her pride after her son reached his second Super Bowl.

Leigh Anne Tuohy, a mother-of-three including Carolina Panther’s offensive lineman Michael Oher, said it is ‘amazing’ that he is returning to football’s top competition this Sunday.

Speaking to Today, she said she is ‘really excited’ to be watching the game on the field, adding: ‘I’m going to put my bling jersey on, and be the proudest, most obnoxious momma I can possibly be.’

Oher was born to a drug addict mother and a convict father in Tennessee in 1986, and spent a troubled childhood in and out of school where he had to repeat both the first and second grade.

Dumped into foster care at age seven, he was eventually adopted by Tuohy who nurtured his love of football that eventually saw him go to the University of Mississippi on scholarship. From there he earned unanimous all-American honors, and was picked by the Baltimore Ravens during the first round in 2009.

Despite a bumpy career in which he was swapped from left to right tackle, he won the Super Bowl with the Ravens in 2013 as they beat the San Francisco 49ers 34-31. Transferred out to the Tennessee Titans, he suffered through a dire season in 2014 which was plagued by a career-low sack rate and an injured toe that eventually saw him dropped.

However, last year he was sought out by Carolina Panthers quarterback Cam Newton as the man to defend him this season taking up left tackle position, on Newton’s blind side. Following surgery to fix his toe, Oher has played his best season to date with a career-low four sacks in 16 starts and a total of three penalties for 25 yards.

Meanwhile the Panthers completed a near-perfect run to go 15-1 in the regular season before seeing off the Seattle Seahawks and demolishing the Arizona Cardinals to win a spot at the Super Bowl. Their dominant form means they go into Sunday’s clash, against Peyton Manning’s Denver Broncos, as the favorites.

Speaking about her son’s journey, Tuohy said: ‘It has been an amazing journey. Literally not one part of it was anticipated. ‘Since the book and movie came out, [husband] Sean and I have written our own book, I’ve written books, and we spend most of our time on the road doing motivational speaking.
‘We are big proponents of the saying, “to whom much is given, much is required,” so we try to give back as much as we can.’

But while the critically acclaimed film won plaudits for Sandra Bullock, who was given an Oscar for her portrayal of Tuohy, it has had mixed fortunes for the family themselves. When Oher was asked shortly after the film came out what he thought of it, he told reporters that he wasn’t a fan.

Asked to clarify his statement, Tuohy said Oher felt his game was being unfairly scrutinized because of the fame the film brought, and exposing him to the glare of the press. Quizzed on her own role as the Blind Side Mom and her new book Turn Around, Tuohy added: ‘I want to see a revolution of kindness, because what happens is, when you’re kind and you give, it’s infectious. You give one time, and it’s a great feeling and you want to do it again and again.

‘We need people to get involved and make a difference. Money is not going to change it — it’s about people. It’s about us realizing that everyone has value and about being nice to the guy next to you.’