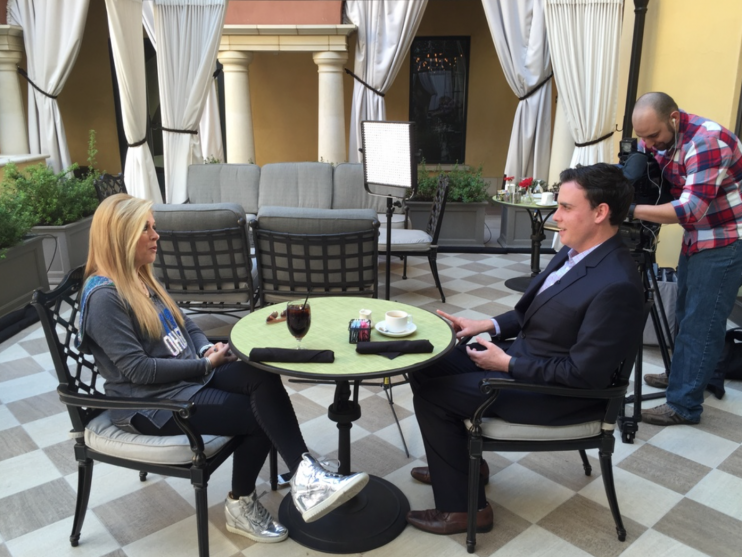 SAN JOSE, Calif. — Leigh Anne Touhy can talk, which is good because her message needs to be heard.

“Everyone in this whole world, this whole universe has a story, everyone does. You have a story. The guy on the bus has a story. Everyone does and ours is the one that God just plucked out and happened to tell,” Touhy said.

Her story is well-known and the basis for the 2009 academy award best picture nominee “The Blind Side” that follows a high-school aged Michael Oher as he bounces from foster home to foster home before finally getting adopted by the Touhys.

There he flourished, earning a scholarship and a degree from Ole Miss before becoming a first round NFL draft pick in 2009 and winning a Super Bowl three years ago with the Baltimore Ravens. Oher is the starting left tackle for the Carolina Panthers.

“What did you see in him that no one else saw?” Channel 9 sports anchor Phil Orban asked her.

Touhy and her husband Sean remain champions of adoption starting the Making it Happen foundation, a nonprofit dedicated to improving the quality of life of children who are invisible to most — those in foster care in need of adoption.

“You can do something to change a kid’s life. It’s just ridiculous that these kids go through life and that they’re unloved and that society deems them worthless because that’s just the furthest thing from the truth when given an opportunity,” Touhy said.

“Whether it’s from a kid that’s been adopted that validates where he is in his life or its the kid that ages out of foster care that says, ‘No one wants me. I’m not worthy. I’m not valuable. No one loves me.’ That always makes me cry that they are valuable and that someone needs to step up for these kids all they need is an opportunity and you can change their lives, Tuohy said getting choked up.

And that’s all she said she gave to Oher, love and an opportunity.

“We just allowed Michael to become the person he was supposed to be and the truth of the matter is there are Michael Ohers everywhere and they just need a chance,” she said.

And Oher needed another chance this offseason after signing a free agent deal with Tennessee. He battled injuries last year and was released by the titans labeled a bust.

“The fact that he was labeled like he was last year just goes to show you don’t ever give up on someone. Don’t ever think that you know they’re finished and down and out and that they’re done and it’s the end of the story because that’s not always the case. Just pull yourself up do the very best you can do be the best person you can be and look, look what happens,” Touhy said.